The Canterbury Cathedral is the mother Church of the Anglican Communion and seat of the Archbishop of Canterbury. Its formal title is the Cathedral and Metropolitical Church of Christ at Canterbury. The Cathedral is both a holy place and part of a World Heritage Site. St. Augustine, the first Archbishop of Canterbury, arrived on the coast of Kent as a missionary to England in 597 AD. Augustine was given a church at Canterbury by the local King Ethelbert, who’s Queen Bertha, a French Princess, was already a Christian. Augustine's original building lies beneath the floor of the nave– it was extensively rebuilt and enlarged by the Saxons, and following a major fire, the Cathedral was rebuilt completely by the Normans in 1070. By 1077, Archbishop Lanfranc had rebuilt it as a Norman church, described as "nearly perfect". The work of the Cathedral as a monastery came to an end in 1540, when the monastery was closed on the orders of King Henry VIII. During the Civil War of the 1640s, The Canterbury Cathedral  suffered damage at the hands of the Puritans. 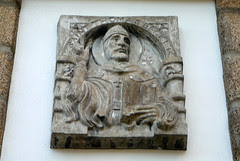 After the Restoration in 1660, several years were spent in repairing the building. The North West tower was found to be dangerous, it was demolished in the early 1830s and replaced by a copy of the South West tower, thus giving a symmetrical appearance to the west end of the Cathedral. During the Second World War, the Precincts were heavily damaged by enemy action and the Cathedral’s Library was destroyed. In 1954, the Library rebuilt and repairing War damage was completed.
A critical moment in the history of The Canterbury Cathedral was the murder of Thomas Becket in the north-west transept (also known as the Martyrdom) on Tuesday 29 December 1170 by knights of King Henry II. The king had frequent conflicts with the strong-willed Becket and is said to have exclaimed in frustration, "Who will rid me of this turbulent priest?" The knights took it literally and murdered Becket in his own cathedral. Becket was the second, out of the four Archbishops of Canterbury, who were murdered.